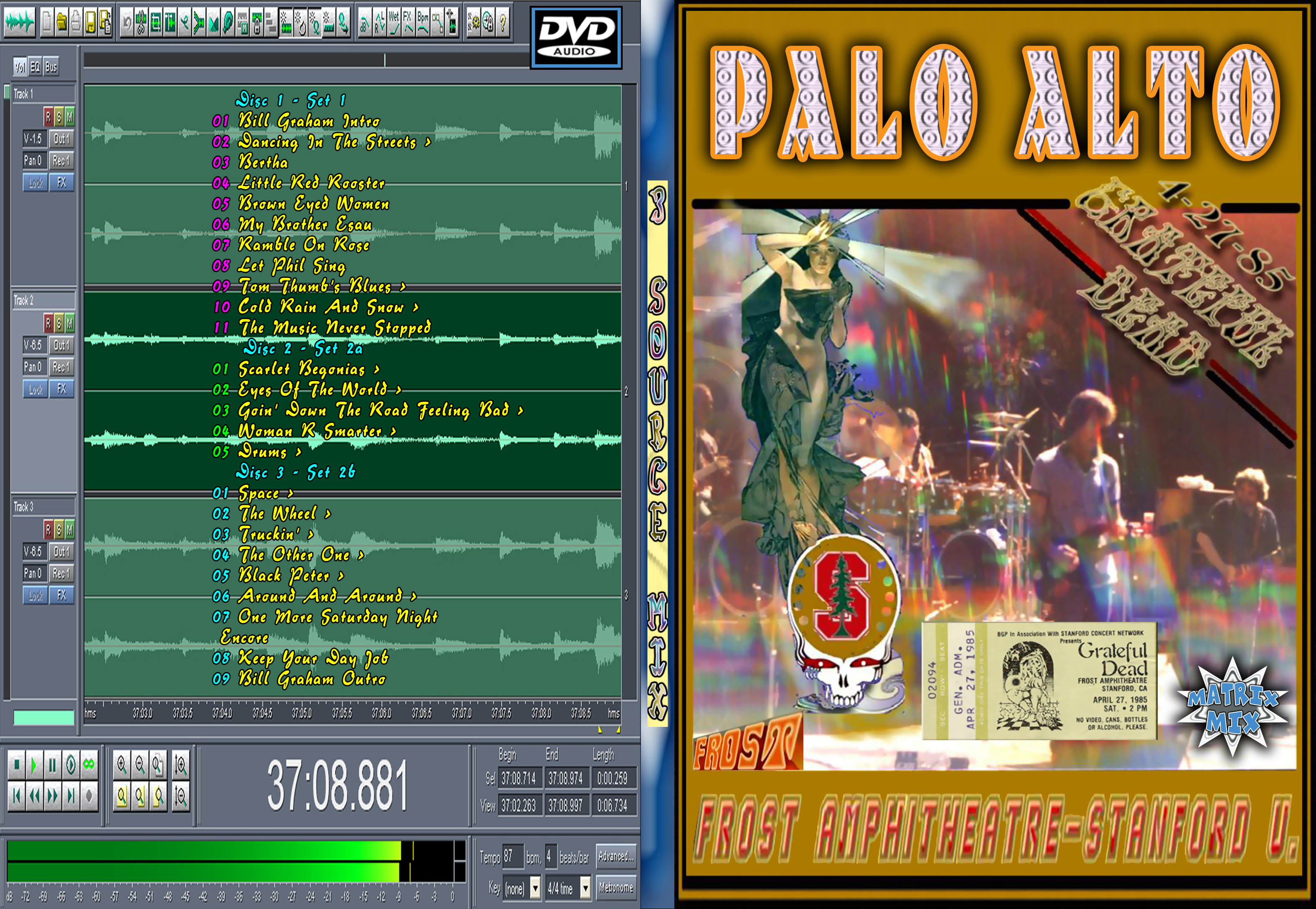 Transfer and mastering by C.Ladner.

Location: on the lawn, 25 feet from the stage, DFC

their loving care getting these sources out. Thanks also to

the Lossless Legs Community (www.shnflac.net) for getting me

these 3 spectacular sources. Also a thanks for some of the

images used in creation of the artwork. I found them years

ago on the net and do not have anyway to properly credit.

FLAC/SHNs were decoded to wave. Wavmerge was used to reassemble

synch all of the sources. SF8.0 was used for the EQ setting

- For best results print at the highest resolution onto glossy

photo paper. Design for use in a clear double jewel case.

After spending several months and likely more than 150 hrs

the artwork. I just want to be done with it. Hopefully it

will be acceptable and without too many typos or errors.

The SBD has a strange sound characteristic that can be heard

through the first few songs and then disappears. As Charlie

progresses". Which is indeed true. The sound keeps cycling

from normal to "overly bright". Could it be a bad Dolby

encode or decode scenario? Only when you listening very

critically. It does not subtract from these really great

Both AUD recordings are very good. The Nak700 sounds like it

typical FOB. Some post-processing was obviously done to

maximize the levels, which does cut down a bit on the dynamic

range. The Senn 421 has a much rowdier feel with closer

crowd, clapping and a good feel for a live show.

All 3 sources had different stoppages between songs in the

first set, most notably was during "Let Phil Sing". Here

we had missing "crowd" material with no overlap. I employ

"borrowing" crowd cheer from different parts of the same

uninterrupted. Take a listen to the first set, the missing

material now flows smooth and is most likely undetectable.

from the NAK700 source, then the Senn 421 source fades in

and then finally the SBD also joins the mix. No music was

missing. This is smooth and is most likely undetectable.

D2 and D3 can be assembled seamlessly on longer media.

d2t01 "Scarlet Begonias" The first 10 seconds is just the

SBD and the NAK700 source, then the Senn 421 source fades in

and also joins the mix. This is smooth and is most likely

used to cover a missing part of the SBD source. Most likely

a repeating musical portion from earlier in the song was used.

In short, "The Other One" was patch with the very same "The

Other One". This was a very tricky edit to find and remove.

change in source it is detectable by the listener.

d1t09 "Bill Graham Intro" is entirely from the NAK700 source.

editing and the multitrack mixdown preserved in 24 bit. It is

unclear exactly what we have in the way of high resolution.

However it seems what we have here would not be represented

accurately in 16/44. What you are getting is the full result

of the matrix mix process. How much different does this sound?

is this better? A little and yes. This is more accurate and

the same material will usually result in very subtle but

important differences. Most of it relying on the quality of

the DVD-A player and the D to A conversion. With that in

mind, this 24 bit copy is no different. Small but important

gains over the same material in 16/44. This is just one

man's take. Take it or leave it.

This show is like a wearing my favorite slippers. Familiar

and very comfortable. I first obtained this show in 1985

and was giving a "friend of a friend" a ride in my car.

cassette of the second set. I was floored. At the time, and

considering my age, I had no idea anyone could get a copy of

a show THAT fast. And what a show it is. Needless to say

the next five years or so were spent wearing out that cassette.

This show is most notable for the only "Scarlet > Eyes" but

is loaded with great renditions, sick jamming and inspired

playing. The first set songs are all played really well.

is just out-of-hand throughout. 'Nuff said.

This Scarlet is my favorite, period. A bold statement but

one I can stand tall behind. Great long intro, nice middle

of the song solo, they come around twice (I LOVE THAT!) before

traveling 100 miles an hour and the band is right behind. A

licks to count. Even GDTRFB is fast paced and fun, with Woman

still keeping your interest. Isn't that a change? Not the

Garcia needed to soak his hand in ice.

Normally topping an all Garcia tri-fecta to opened set two,

Scarlet > Eyes > GDTRFB, would be hard to beat, beat it they

do, beat it to death. The next 45+ mins is transcendental,

perfect, seamless, inspired, rocking/soothing and any other

accolade you can toss in for good measure. This time a new

stage in the post drums part. Note by note, second by second

the band just clicks. It reminds me of the type of playing

was just so in tune with each other and what they are doing.

While clearly much different, take a listen. These guys

are so tuned in to what each other is doing it is 6 as 1.

Ramble On Rose with it's vocal crescendo shivers, and a spiral powder line during Scarlet inspires Tom Curren'esque power and flow sprays against an indigo sky.

Oh, and watch out for those laughing gas groves in the Eucalyptus forest outside the annual Mellow Head Frost BBQ; you might end up stepping into another tab of Owsley Bear Vision Quest (Psssssssssssss...)
Reviewer: kee-zeee - favoritefavoritefavoritefavorite - July 5, 2015
Subject: Frosting on the cake..
I like this Matrix..and this show also brings back memories for me..I had gotten the tape about a month after the show and played it often..that December of 85 I took my girlfriend to Longwood Gardens just outside of Philly..prior to entering we each ate a couple Red Gels and enjoyed all the colorful lights and X-mas decorations..about two hours later we left and were quite electric..I cued up the second set and Scarlet>Eyes>GDTRFB>Woman played for an interesting ride home that I will never forget..That girlfriend is now my wife of 25 years..Give It A Whirl>Forever Grateful>Forever Dead
Reviewer: c-freedom - favoritefavoritefavoritefavorite - January 10, 2014
Subject: "We are hanging on to him for awhile"...
Great editorial notes with this sweet recording.
Another one of my favorite tapes from back in the day brought back even better than I remembered it!